Narratives in Space+Time is participating in two exhibitions in Halifax in Spring and Summer 2018. 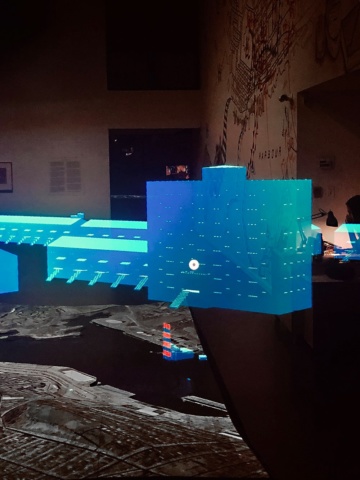 Five architectural models created with NiS+TS collaborator Angela Henderson were shown in the Exhibition Room, Architecture Building of the School of Architecture at Dalhousie University, as part of an exhibition entitled Model Models, May 4-11. A series of large scale photographs associated with the models were also exhibited.

Maritime Museum of the Atlantic

The Maritime Museum of the Atlantic in Halifax is currently exhibiting two NiS+TS projects: The Psychogeographer’s Table, and Fragments and Locations: an incomplete inventory, as part of its program concerning the 1917 explosion in Halifax harbour. Both pieces were originally shown at the Dalhousie Art Gallery in 2017. The Psychogeographer’s Table is a collaboration with faculty and students from Dalhousie University’s Department of Computer Sciences, GEM Lab, and with students from the 2016 Dalhousie University School of Architecture FreeLab. Fragments and Locations: an incomplete inventory was created with support from the Nova Scotia Museum Research Assistance grant program. Please see the Maritime Museum website for information about hours and admission:    https://maritimemuseum.novascotia.ca/visit-us/hours-admissions